This article will show you how to make a shutter release cable for a Canon camera. It took me about half an hour once all of my materials were gathered. I came in at a total of about eight dollars. It has three switches and buttons. The black button on mine triggers the auto focus. The red button triggers the shutter. Finally, the switch triggers the bulb mode, or long exposure. This can be used to take astronomical photos that show the movement of the stars in the picture. The release cable in general can be used to take close-ups of wild animals or group photos with everyone in it.

Depending on your camera, there will be different plugs on the side of the camera. Mine has three plugs. On the bottom there is a mini USB plug to transfer the photos to a computer, and has the standard three-arrow USB symbol. The middle is a plug for external control, and has a picture of a box on a loop going to a plug, which stands for a shutter release cable. Things that can be plugged into this are intervalometers and standard shutter releases. Mine was a 2.5mm plug, one millimeter smaller than the standard headphone plug, but it could be a three pin plug or a 3.5mm for some cameras. The top plug is labeled "Video out", and has a 3.5mm jack. I'm not quite sure what this is because the Canon Rebel XS, my camera, does not have video capability. This will specifically focus on the 2.5mm plug, which almost all Canon cameras have.

These are the parts I used. The 2.5mm jack in this isn't the one I actually use, because it is still connected to the headphones. I went to Radio Shack and bought another. Remember that there should be 3 connections on the jack, and two black rings on the metal part. 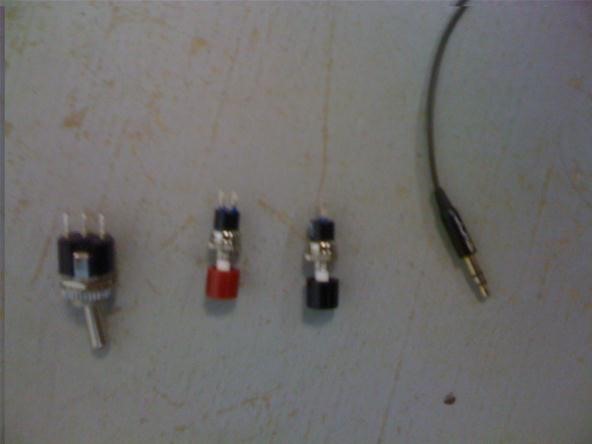 There are 12 connections you have to make. This is a diagram of what you have to connect, and what they do: 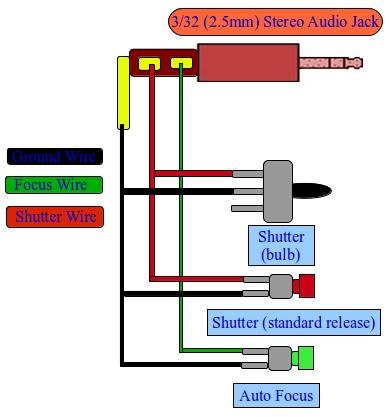 I made the wire connecting the plug to the switches about twelve feet. By the time I was done, I had a mess of wire and I had to untangle it all. 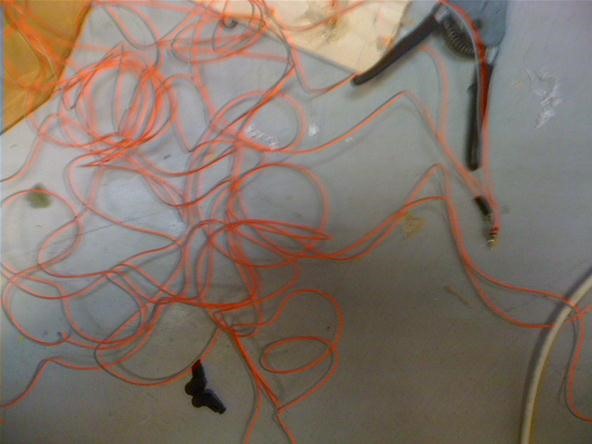 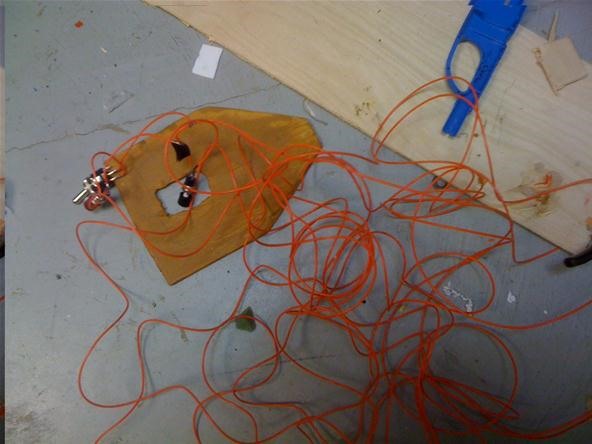 If you are using a project box, this is very easy. First, I gutted the whole utility lighter. You should keep the electric gas lighter, as this can be used in a lot of projects. 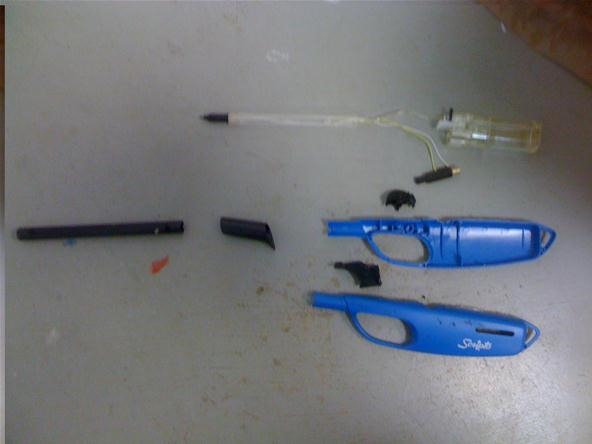 That little black thing with the yellow and white wires is the gas lighter.  I later made it into a mini taser. I forgot to thread the wires through the metal tube, so if you want to, remember to do this before you connect the wires. 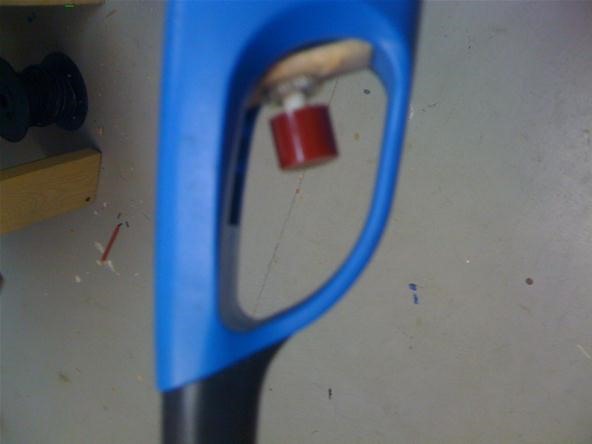 I attached the push button to a piece of wood to fill the trigger gap and then glued it in place with Gorilla Glue. 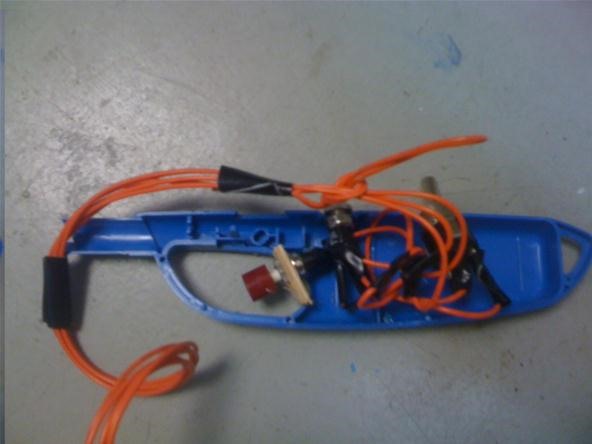 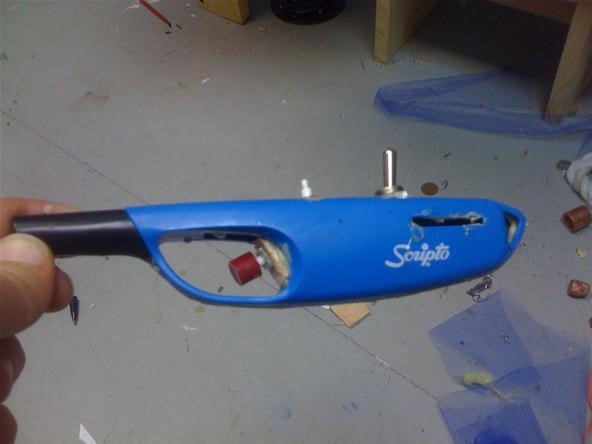 This is the completed shutter release. I have installed the button and the switch on the top. The button doesn't have the black cap on it, though. I am thinking about painting it if I have time.  Have fun and be creative! Post any questions below.

Cool! I love my shutter trigger. I was a wuss and bought it though.

Nice job! I'd love to see any Astro Photos that you take with it. I've taken a few with mine and it's pretty awesome to see the stars spinning around Polaris.

It would be great to see the photos. Please post them to the WonderHowTo Company World! We'll share them (along with this tutorial) in the next community roundup.

Unfortunately, it has been rainy and cloudy recently. Also, I was thinking of starting an astronomy world, but it would be too hard to handle and update, and it would die out quickly. I'm not sure why, but on my camera the bulb mode doesn't work. It focuses and takes the picture, and I think this is because my camera doesnt have bulb mode, but it should still work. Supposedly it works for everybody else who uses it, though, according to forums and such.

I have taken astro photos through a friends camera, though. I wish the bulb mode would work as this is the reason I made the shutter release.

What model is your camera?

A Canon Rebel XS. The bulb setting on it can last up to 30 seconds, but I thought it would be different with a shutter release...

I still have another how-to leading p to the big one, btw.

Hmmm... seems like it is supposed to work. 30 seconds is supposed to be the max without it on Bulb mode... Have you put it in bulb mode and then just held down the shutter button to see whether that is working?

Cool! So now that you've figured it out...does it work with your trigger?

This is great. Unfortunately my camera has the N3 jack instead of the stereo one, and it doesn't look like they sell any N3 plugs anywhere. I did find a few tutorials on making an N3 plug here, but it looks pretty messy. Maybe I can find a busted remote on eBay or something that still has the connector. Dang.