Professor Wafaa Bilal of New York University plans to soon undergo a surgical procedure that would temporarily implant a camera in the back of his head. The project is being commissioned for an art exhibit at a new museum in Qatar. The Iraqi photographer will be a living, breathing cyborg for an entire year, during which the implanted camera will take still photos every minute, simultaneously feeding the images to monitors at the museum. 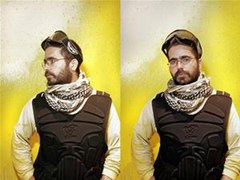 "The artwork, titled 'The 3rd I,' is intended as 'a comment on the inaccessibility of time, and the inability to capture memory and experience,' according to press materials from the museum, known as Mathaf: Arab Museum of Modern Art.

The possibility of exposing private encounters without participants' consent, has raised concerns among NYU administrators and faculty.

During the course of the discussions, Mr. Bilal has informed all of his students of his plans and has agreed to cover the camera with a black lens cap while on university property, according to Mr. Ritchin. Another proposal would require him to turn off the camera while in NYU buildings, Mr. Beckman said.

Mr. Bilal's personal activity is a separate matter, of course. 'I guess anybody accepting a dinner invitation will have to realize that certain things will be going on,' Mr. Ritchin said." (read more)