From Boston.com's The Big Picture, what a real-life version of the Green Hornet's gas gun might look like. Taken in Afghanistan in February of this year, an Afghan army recruit is pictured shrouded in a cloud of shocking green smoke as he participates in a graduation parade after an oath ceremony at Ghazi military training center—an American effort to strengthen Afghan forces so they can fight against Taliban strongholds. 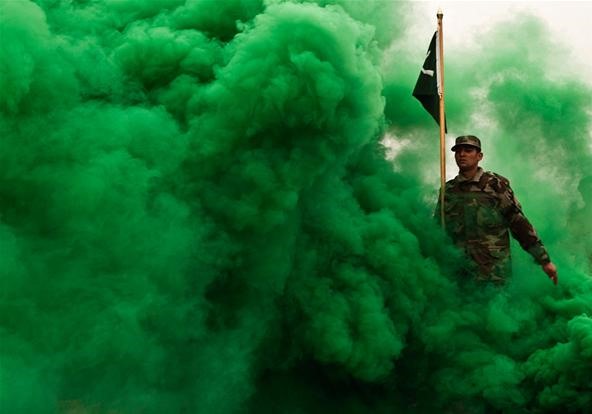 "In February, suicide attacks by militants increased, and villagers and Afghan officials accused NATO of killing a large number of civilians in airstrikes... Afghans and NATO-led soldiers are working and living through moments of sheer terror and numbing poverty. Through the strife, we see glimpses of the enduring human spirit."—Leanne Burden Seidel

See what else is happening in Afghanistan:

That chap better lay off the chili! If my farts were that green I'd call a specialist!