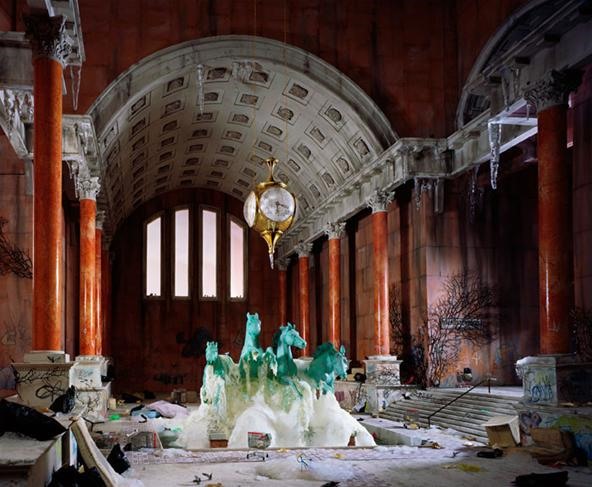 Nix's process of constructing her subject matter rather than "discovering" it has earned her the title of "non-traditional photographer." Though the end product is a two-dimensional image, the sets showcase Nix's impressive aptitude for three-dimensional rendering. They range in size from 50 to 182 centimeters in diameter, and take approximately 7 months to construct and photograph.

Fascinated by the process behind Nix's work, I contacted her for a brief Q&A. Below, Nix answers a few questions, and goes into specifics regarding 3 pieces: Bounty (2004), Laundromat (2008), and Laundromat at Night (2008).

Q. How did you develop the skill set needed to create such intricate models?

A. When I first starting building dioramas, I went to my local bookstore for research. I found a really good book on landscapes for model railroading. This introduced me to modeling secrets, like dying sawdust to make it look like ground cover. I still pick this book up every now and again for scenic tips.

As for my architectural interiors, I come by my fabrication skills pretty honestly. I've taken several advanced woodworking classes in the past, plus I have a degree in ceramics. I can envision a three-dimensional space and immediately know what materials to use. I'm also pretty good at fabrication. I know how to make everyday materials look industrial or delicate. 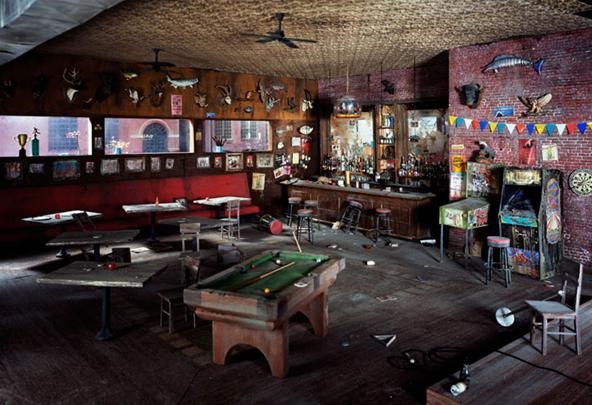 Q. What is the typical amount of time required to create one set?

A. It takes an incredible amount of time to build the diorama. Most of the time is spent fabricating the smallest elements that bring a scene to life. Right now, my partner Kathleen is building a chandelier for an upcoming scene. The first evening was spent at the bead store, picking out a variety of beads and findings. The next night, the chandelier arms were cut to length out of brass tubing. The next evening, the arms were put through the bender to create the perfect shape, then Kathleen painted them with size, waited for the size to set up, and then gilded them in aluminum leaf. After this, it took about ten hours to figure out how to tie everything together and string the beads.

We both work day jobs, which adds to the time spent building a diorama. Our studio time takes place at night and on the weekends. As far as everyday work, I spend most of my time waiting for paint to dry or glue to set. 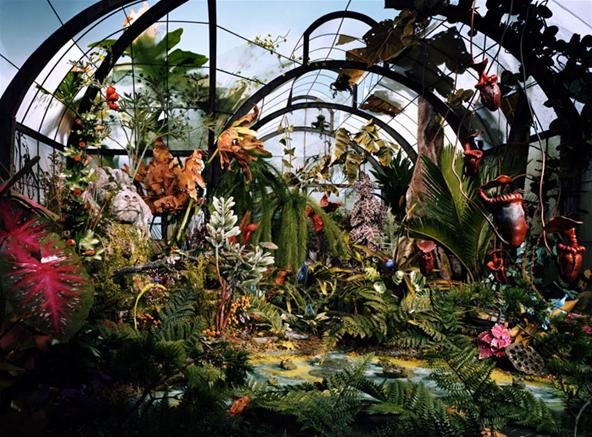 Q. Rumor has it you destroy the sets when you're finished. Isn't this heartbreaking?

A. Yes, I destroy the sets when I'm done. My apartment is pretty crammed, so keeping entire scenes intact would be impossible. I break the dioramas apart and save whatever materials can have a second life, such as walls, floor and ceilings. I'll keep some of the architectural elements like columns and trim, and hope to use them in a commercial project. When I break a scene down, this means I'm ready and anxious to start the next diorama. It's not heartbreaking at all, but rather uplifting. Many times I've been staring at these things for months on end. Sometimes it nice to have a new view.

Q. Building process and specs for "Bounty"? (shown below) 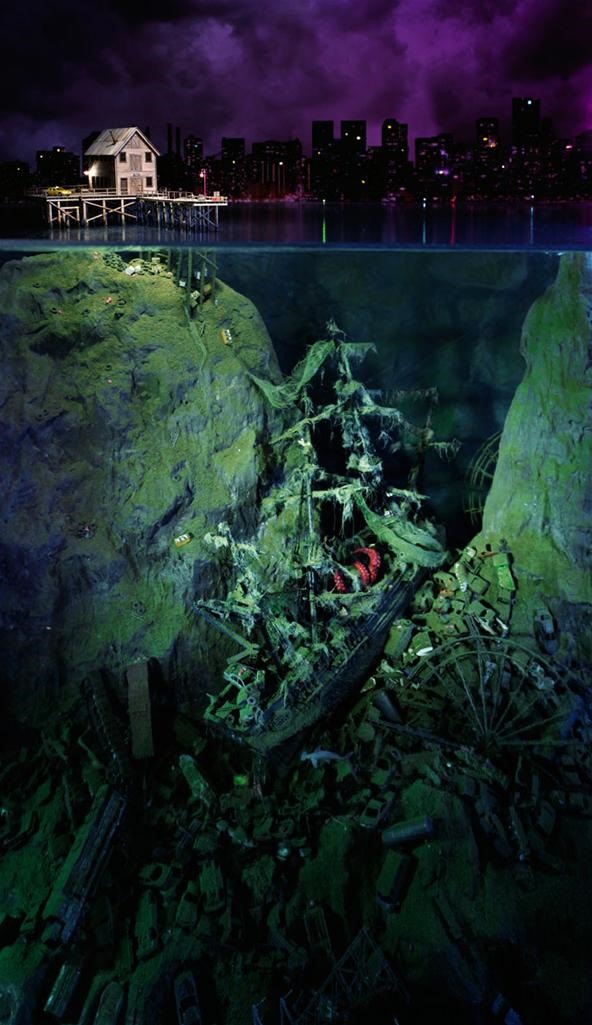 A. The underwater landscape, the pier, the building, and the background are all made by hand. The abandoned ship, cars, and debris were used in other scenes, so it was nice to give them a second life. These were purchased. The Octopus tentacles were also purchased.

The most difficult part was figuring out the waterline, asking myself if this made sense visually. I created it with a large piece of Plexiglas that is laid horizontally across the top of the scene. I poured a thin layer of polyester resin to create the water ripples.

I created the lighting effect with studio strobes. I gelled the upper part of the diorama with a heavy purple gel, and lit the lower part of the scene with a combination of green and cyan gels.

The diorama stood about 40 inches tall, and thirty inches deep. There was just enough space in the bottom of the scene that it provided a nice place for our cat to lay about. It probably took about three months from start to finish. The hardest part was finding the perfect ship. Thank you eBay.

Q. Can you go into the building process and specs for "Laundromat"? 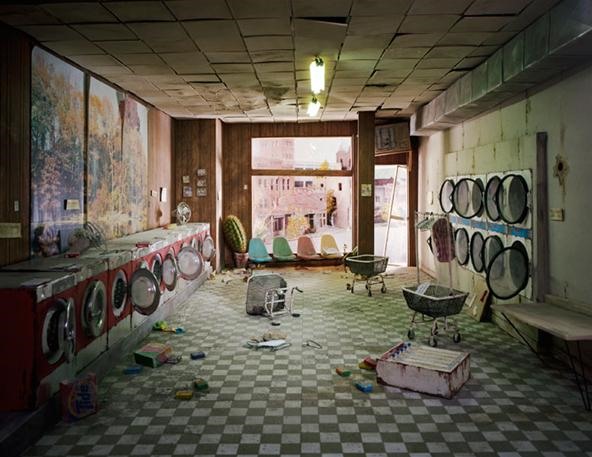 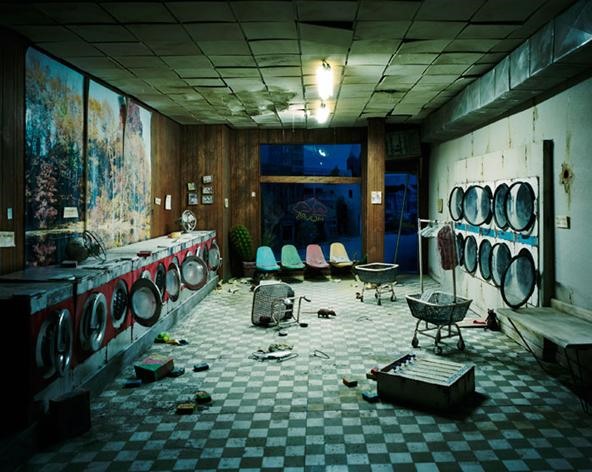 A. I purchased the fluorescent light from a company that specializes in miniature electronics. The size of this light set the scale for the rest of the scene. It's slightly bigger than dollhouse scale, which is 1:12. This scene is probably 1:15. Everything is fabricated except the cactus.

The dryers and laundry cart were made by my friend Dan. He made these out of black Gatorboard. The circular windows were vacuformed on an old Mattel Vac-U-Form toy they made in the 1960s, back when really cool toys were available. My partner Kathleen fabricated the Eames-esk chairs and I worked on the floor, wood paneling and ceiling. The most difficult part was probably the wire laundry baskets.

This scene was about 15 inches tall, 20 inches wide and about 40 inches deep. It took about four months from beginning to end. We had to wait for Dan to finish his part of the workload before I could measure and cut the walls and floor.

Q. Lighting in the daytime shot vs. night?

A. I purchased the fluorescent light from a company that specializes in miniature electronics. This was the only light source for the night scene. I've spent too many nights in the Laundromat under that horrible light, listening to them buzz.

For the daytime shot, I had lights at both ends of the scene to flood the structure with a warm glow.

do you offer the prints for sale ?

i would try contacting one of her galleries— http://www.lorinix.net/contact.html

(she also has two books on blurb— http://www.blurb.com/bookstore/search?search=lori+nix&x=30&y=11)