The widely used expression "free as a bird" intimates an enviable existence: delicate, yet mighty wings transporting to destinations no human could so breezily venture. But despite their fanciful, superhero ability, in truth, the avian race leads one of the most difficult existences in the animal kingdom. Yes, birds have existed for eons—they likely evolved from small dinosaurs of the Jurassic period—but for these creatures, life can be ruthless. 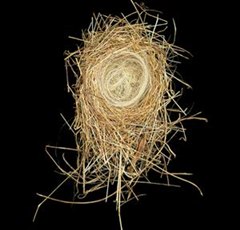 Sharon Beals' recently published book, Nests: Fifty Nests and the Birds that Built Them, asks readers to stop and consider the life of the bird, for it is one of astounding self-sustainability. Captivated by Sharon's' portraits of "bird architecture", we contacted her for more insight into these tenacious creatures. Beals passed along her artist statement, which is partially reiterated in brief below.

Inspired by Scott Weidensaul's book, Living on the Wind—a 2000 Pulitzer Prize finalist in Nonfiction—Sharon learned that the feat of migration is nothing short of epic—birds navigate by stars, magnetic fields, or polarized light, with no Google Maps at hand—just pure, inherited instinct (according to one hypothesis). They travel extreme distances—hemisphere-to-hemisphere—all the while needing both fuel and refuge.

Amazed by their persistence and resourcefulness, Sharon chose to focus on the refuge: the nest. The last estimated count of avian species totaled roughly 10,000—to investigate and document every nest construction would be the task of a lifetime. Beals chose to feature 50 varieties in her book, and reveals a wide range of techniques and materials used—including mud, branches, sticks, leaves, lichen, spiderwebs, moss, saliva, fur, bones, and human-littered debris. Each unique nest "architecture" demonstrates the species' methodologies. 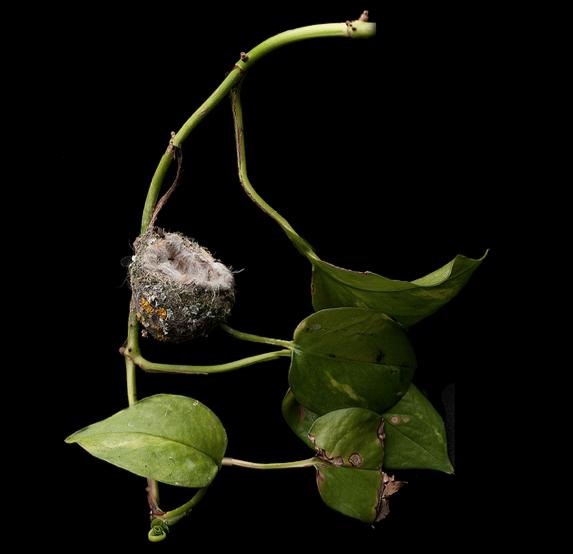 The end result is a collection of stunning photos, each nest presented in a striking fashion against a clean black backdrop. When asked about her process, Sharon told us:

"The nests were photographed on a little photographic set that I made in each museum where I worked—the California Academy of Sciences, the Museum of Vertebrate Zoology, and the Western Foundation of Vertebrate Zoology. It was a black cloth, and the only clean up I did was in Photoshop to remove the few bits of nature that might have fallen from the nests when I placed them on it."

In Sharon's artist statement, she poetically declares, "I offer these photographs like the bower bird luring a mate, with the hope that others would be as seduced as I to wonder and learn about the birds that built them." And "wonder" we certainly do. Profiled below, an excerpt of 5 nests from Sharon's 50.

Perhaps the most morbid of Sharon's selections, you may think of the House Wren as unassumingly cute and tiny, but in reality, the species is capable of inflicting fierce violence if their breeding territory is threatened—known to destroy eggs, nests and in extreme situations, the young of their competitors. Their nest building process is fascinating. The male begins by marking a territory with anywhere from 10 to 400 sticks. Once a female is attracted, she contributes, potentially adding up to 700 sticks! The end result is something like a "house on stilts", which keeps the soft resting place—nested with grass, bark, wool and feathers—safe.

(Note: See the tiny skeletons above? The House Wren leaves the nest as early as two weeks after hatching. The runts are left behind, and eventually die.)

A beautiful species found in the New World, the Golden-Hooded Tanager first mates, and then builds a nest as a couple, weaving together a sturdy cup-shaped structure with plant fibers and threads of the horsehair fungus. Occasionally, mated pairs choose to inhabit a pre-constructed structure, such as the fronds of banana plants or the empty cavities of tree trunks. Shown above is a rare and stunning occurrence—the interior of a honeycomb transformed into a home and nesting spot.

The Anna's Hummingbird fabricates a nest of beauty and dedication—it can take a female anywhere from 2 days to a month to finish her abode. She binds fine plant fibers and human or rodent hair with spiderweb and cocoons. Once finished, she chooses a male, mates, and gets to work preparing her shelter for incubation. She creates a warm, protected home for her eggs using a lining of beautiful and soft matters: flowers, feathers, lichen, moss, and pussy willows.

Perhaps the most fascinating of the bunch in terms of process, the Common Tailorbird earns its namesake for its nest-making abilities—the species almost quite literally "sews", tailoring still-attached leaves of a shrub into a nest: "Bending a leaf, or sometimes two, or more, and piercing holes around their edges with their beaks, they insert threads of spiderweb, cocoon silk, plant, or even manmade fibers to hold them in place. They secure these 'stitches', as many as two hundred per nest, by fraying the end of the fiber into a rivet-like ball."

Are you as wowed by Nests: Fifty Nests and the Birds that Built Them as we are? WonderHowTo has 1 signed copy to give away. To enter for a chance to win, you must:

Please submit your entry by Sunday, April 24th, at 11:59pm. The winner will be randomly selected and announced Monday, April 25th.

CONTEST CLOSED: The winner is Huy Nguyen! Thanks to all for participating!

Wow--I always thought birds' nests were cool but this is amazing. Love the photography but the research the author did is like icing on the cake. Love this article!

Breathtaking! The intricacy of a bird's nest has always intrigued me.

Best wishes on the success of your book, Sharon. I personally love watching the Eagles of Hornby Island on the net. There are many live feeds out there on the net for your viewing pleasure. If you've been bitten by the bird watching bug as a result of your recent publication, viewing a live feed at the end of the day is very satisfying.

The tailorbird is incredible! I remember watching them on nature shows as a little girl. Looks like an extensive book.

Honestly, the first thing I thought of when I saw this post was soup, a Chinese delicacy made from swallows' nests, which are put together with saliva. I do love the pictures - they're very beautiful.

Great photographs! and they are so alive, even if they are taken in museums, it seems like birds willbe bakc ther ein their nests soon!

Oh man I am so glad my parents are not house wrens. These photos are really cool. I had never really looked closely at birds' nests before but now every time I see one, I'll think about all the work that was put into it!

This makes me want to steal some birds nests and take pictures of them. But I'd probably feel bad afterward.

Cool pics, interesting to see the different materials used. Would be a great school project book for my son.

I especially love the photograph of the house wren's nest. It's haunting in just the right ways. When we think of nests we traditionally see them as homes, places where life begins, not a place for death.

Curious in the Universe 11 years ago

Beautiful photographs. The shot of the house wren looks almost staged, the way the skeletons look interwoven with the nest construction.

This looks like a fascinating book. We are big birdwatchers.

Theses nests are intricate and elegant works of art. Birds are one of the few species that rival human beings in the creation of organized beauty. I wonder if bird species secretly like to compare their dwellings to one another.

I have always liked finding nest to look at and would love to win this book.