If you missed our previous posts on Iraqi artist Wafaa Bilal's attempt to go cyborg, here's the short and skinny: First, Bilal announced a plan to implant a camera in his head, a project entitled 3rdi, which would record his daily life while simultaneously feeding the images to monitors at the Arab Museum of Modern Art in Doha, Qatar. Then, he actually did it (and, yes, it was gnarly). 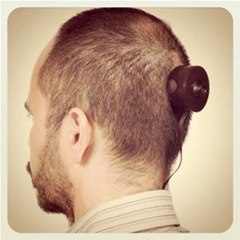 But Bilal's project recently hit a road bump when his body rejected one of the three titanium posts implanted by a body-modification artist at a tattoo shop in Los Angeles.

Bilal was experiencing chronic pain, and when steroids and antibiotics failed to alleviate the problem, he was forced to undergo surgery. As Bilal waits for the wound to heal, he continues to carry his camera, tethered to the back of his neck, and plans for a superior, lighter solution for a future re-implant.

Bilal says: "It's a performance. With the performance comes endurance. But also it's a commitment. And I didn't feel that strapping something around my neck would be the same way I'm committed to the project as mounting it to the top of my head."

While we're on the topic of body-modification art... (this one was just too horrifying to post on its own, but now that we've gone there, it's only fitting)... performance artist Stelios Arcadious implanted a third ear onto his arm back in 2006. Arcadious spent 10 years searching for a surgeon who was willing to attach the labratory grown organ to his left limb. 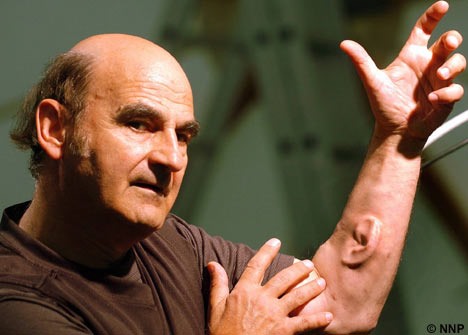 Arcadious is interested in pushing and "improving" the human body, both physically and technologically. He has made the following statements: "The body lacks of modular design," "Technology is what defines the meaning of being human, it's part of being human," "The body is biologically inadequate."

I know you're supposed to suffer for your art, but I'm not sure that equates to extreme attention-seeking masochism.

What's clear is that Stelios Arcadious's brain is biologically inadequate.